Girl Scouts of Eastern Massachusetts (GSEMA) celebrates the 100th anniversary of Camp Cedar Hill, our 75-acre camp for Girl Scouts of all ages located in Waltham, Mass. This milestone marks the historical location as one of the oldest Girl Scout camps in the country. 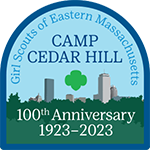 Camp Cedar Hill began as a 200-acre working farm purchased by the Warren Family. Philanthropist Cornelia Warren, who took over management after her father passed, opened the farm to religious, educational and social service organizations as well as hosted a famous maze for visitors. In 1923, 75 acres of the farm were gifted to the Massachusetts Girl Scouts, as per Cornelia’s will for the estate to go to a charitable organization after her death. The camp was later converted for Girl Scout use with help from Hellen Storrow, the chairman of the Massachusetts State Camp Committee at the time.

Since its re-ownership, the camp has hosted key Girl Scout moments and people, such as the first International Girl Scout meeting in 1926, which included Girl Scouts founder Juliette Gordon Low. Today, the camp welcomes hundreds of Girl Scouts each year looking for exciting, life-changing summer experiences to develop each camper’s courage, confidence and character.

Purchase Camp Cedar Hill 100th Anniversary commemorative items at the Girl Scout Shop at Camp Cedar Hill, like this patch (on left)! More items will be added in the coming months, like bucket hats, bandanas, blankets, and T-shirts. Visit the Shop today!